Another letter from Becky Raymond who is serving a PC Response assignment in Blantyre, Malawi: 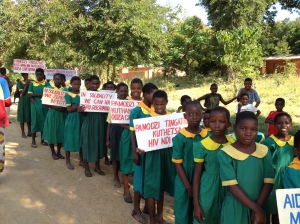 Schoolgirls on an HIV awareness march

Let me start off by answering the question that many of you may be thinking – is there Ebola in Malawi? At this point no. There have been no cases of Ebola here.

Malawi is in southeastern Africa, south of Tanzania and west of Mozambique. Malawi is a long way from the West African countries experiencing the epidemic. The U.S. is closer geographically, than Malawi. That is not to say that it could not come here. As we know, travel across borders can be very easy. Malawi is not at all prepared or equipped to deal with Ebola. There is a branch of the U.S. Centers for Disease Control and Prevention (CDC) here, and they are actively monitoring the situation. At a time like this it is natural to think of one’s own risk. However, my fellow health volunteers and I are thinking a great deal about the situation in West Africa and how to help. So, if you are inclined to make a donation to the many organizations and agencies that are involved in helping fight the epidemic, please go tohttp://www.cidi.org/ebola-ngos/#.VA-ukbxdVig

Meanwhile the HIV epidemic is still impacting millions in southern Africa. That has been the focus of my work here. As I 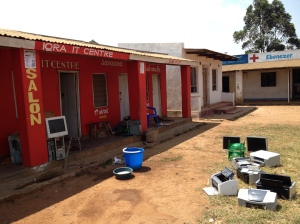 mentioned in my previous letters (yes, several months ago), I am working on a project to map and survey all the HIV/AIDS non-governmental and community-based organizations in the Blantyre District where I work.  My Malawian colleagues and I applied for and were awarded a small grant from the U.S. PEPFAR (the President’s Emergency Plan for AIDS Relief) to cover the project costs. We have finished the surveying and GPS coordinate gathering portion of the project. Last week, a fellow Peace Corps Response volunteer and I held a training for staff in QGIS, a free mapping software program, that will enable us to make and print maps of the locations of these organizations in the District. The purpose of the project is to improve collaboration, response and coordination among the organizations and with the District. It is also to strengthen strategic planning based on the District’s development goals. 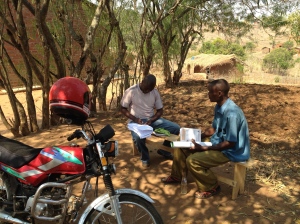 Conducting one of the surveys of HIV-related NGOs

I am now in my 8th month, two-thirds of the way through the year. I have been here long enough that it feels familiar, and somewhat comfortable, sometimes not. I am still adjusting to the reverse of seasons. We had winter in July and August, with cold, misty rain and wind. It got down into the 40s at night and really did feel like winter, since there is no heat in the buildings. It is very hard on the majority of Malawians who only have small fires as a heat source.

It is now the hot season and temperatures are in the 90s. The rains won’t come again until late November or early December. Even though I live in Blantyre, the second largest city, there are few places with air conditioning. My office is not one of them. I am learning to work in 95 degree heat, and have brought a fan to my office, but sometimes all it does is blow hot air around.

Malawi held a presidential election in May. It was rough going, with some violence on election day, and several incidents of ballot boxes missing or damaged. The election was contested but official results were finally released three weeks after election day. The new President, Arthur Peter Mutharika, a professor and lawyer, lived for many years in the United States. It is too early to tell what his presidency will bring to the country. Foreign government donors have largely withheld the 40% of the budget that they contribute annually, due to “Cashgate”. Cashgate occurred two years ago, when high level government officials stole millions of dollars from the national budget (mostly foreign donated funds). Malawi is now struggling to operate under a severe austerity budget.

At the end of May, I moved into a small guesthouse in the central part of the city. It is walking distance to my office (about 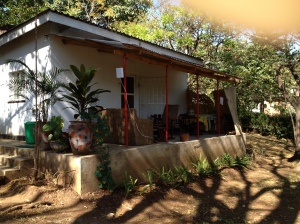 a mile and a half), is furnished and very comfortable. I even have a washing machine and microwave! Quite spoiled by PC standards. My landlord is Irish and his wife is English, so we have fun communicating in our respective accents and comparing and contrasting our cultures and countries. They have lived in Malawi for 18 years and raised their four sons here.

My thoughts turn more and more now to returning home in February. It is right around the corner. It will be wonderful to see you all again.

-Meeting are usually the 1st Tuesday of each month at 6pm-

Tuesday, March 3 at 6 pm. We will meet at Sue Senecah and Van Calhoun’s house (435 Bushnell Rd, Chatham NY 12037). Potluck dinner so please bring a dish or drink to share! We will be doing some advocacy work and reviewing our annual report and budget.

Directions to Sue Senecah’s and Van Cahoun’s home, about 25 minutes from downtown Albany, 35-40 minutes from downtown Schenectady.
435 Bushnell Road, Chatham, NY 12037 H 518-392-2693 C 518-210-3027
Directions below b/c some GPSs endlessly loop drivers off and onto the Taconic Parkway!
It’s not as convoluted as it might appear, you’ll see!
From Albany
Take 90 east.
Get off on the Taconic State Parkway, go through toll booth, and drive ~3 miles.
Get off the Taconic Parkway at the exit for “295, Chatham, East Chatham” At the end of the exit, turn LEFT and drive to the stoplight.
At the stoplight, turn LEFT onto 295 (towards East Chatham).
Go under the Taconic bridge and IMMEDIATELY turn RIGHT onto BIRGE HILL ROAD (also look for “Taconic Parkway North sign)
Drive about a mile. Along the way, on your right, notice the entrance to the Taconic Parkway North that you’ll take going home.
To your left, notice a large white house/porch. Immediately after this, turn RIGHT onto BUSHNELL ROAD (no left possible).
We are the SECOND driveway, 435 BUSHNELL ROAD. Look for RPCV sign. Mailbox on the left, driveway to the right. Drive up and park wherever makes sense!
From the South
Come north on 87, take 90 east towards Boston, and start at #3 above
OR
Come north on the Taconic Parkway, get off at the last exit before the toll (big signs announce this), turn right at the stop sign, and start at #7 above.